Held last April 14, 2011 at the grounds of barangay hall after the regular sangguniang barangay session. This activity has been spearheaded by the incumbent Punong Barangay Inar Trinidad & his council. It is usually done after the first regular session of the month to which all the barangay officials and employees are able to eat lunch simultaneously using the "boodle fight" tradition of the military. 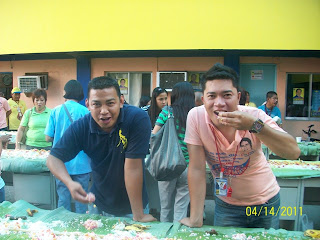 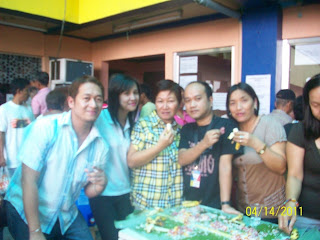 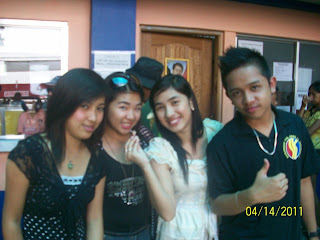 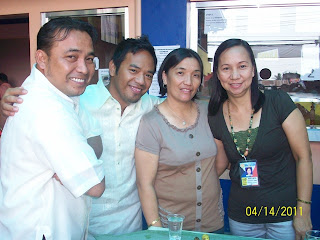 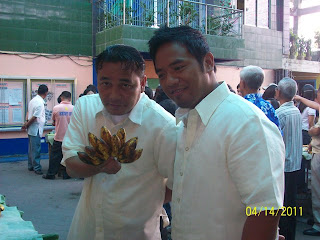 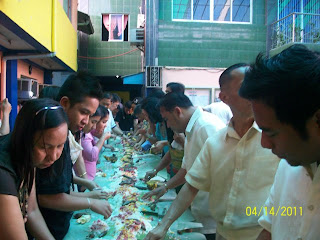 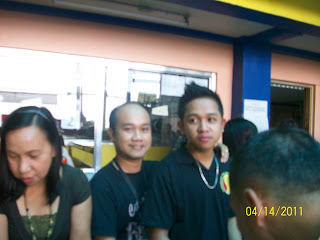 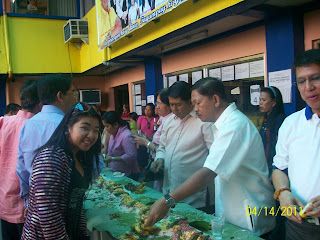 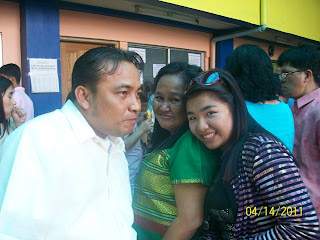 Posted by waldzrenales at 07:44 No comments: Links to this post

Last April 9 to 10, we went on a "Zambales Tour" with some friends and co-workers of Barangay 176. Actually, it is an outing for the Treasurer's Office. It just so happen that Kagawad Joel Bacolod is the committee chairman of budget, finance and appropriations of our barangay, and in effect, the treasurer's office is somehow under his jurisdiction. Excited ako sa pag-alis dahil matagal na rin akong hindi nakakapunta sa Zambales. The last time I went there was in April of 1994 at Baloy Beach Resort during the summer outing of Grandorient Mills Corp., the company to which my mom had worked since 1970's.
We departed Bagong Silang at around 1:00 a.m. of April 9 on board the usual crosswind of Kagawad's. Willy Faraon and Jojo Ramirez drove the vehicle. Kagawad Aida Corrales was also with us but she used her own vehicle for the trip. The staff of the treasurer's office left Bagong Silang at around 3:00 a.m. that day also sing a chartered bus Gloren Trans. On the way to Zambales was very fun... for we don't know the location of   Pundaquit. All we have is the name of the resort, Villa Janella, and we have to locate it since none of us knew the place. First timers kaming lahat sa Pundaquit. Nakakawala pa ng antok ang mga patawa ni Ogie Corrales at ni Patrick Chua. Our first stop was in a gas station before Olongapo City proper to refuel. There we took some pictures that made the gasoline boy laughed. Siguro akala nya mga baliw kami! Ang kukulit kasi. Bidang-bida si Camoteng Willy!

We also asked the gasoline boy where is Pundaquit located and he gladly gave us the direction. We drove again until we reach the town of Castillejos, Zambales. We stopped infront of the public market and we had a hot "goto". Pero lugaw lang naman yun na may konting laman! Haha.. goto na sa kanila yun.. Ok na rin, nabusog naman kami. And before we left the store, we bought varieties of junks para may "kutkutin" habang nasa byahe.


The staff of the Barangay Treasurer's Office will be accommodated in this resort upon their arrival. We then decided to leave the resort to look for other possible alternative place to stay, for we thought that the place is not that awesome and accommodating on our part. It does not meet our expectations though. We did a resort-hopping, and to our dismay, we learned that almost all resort is fully-booked that time! Mahirap pala ang walk-in sa Pundaquit pag weekend, specially ngayong summer season. We waited at Nora's Beach Resort information desk to open, hoping that there is still a vacant room or some people will be checking out that morning... and again, to our dismay, the information desk officer told us that they are fully-booked that day, and they have guests expected to arrive that morning! He then suggested Sir William's Resort and Villa Garcia, a resort not far from Nora's. Sir William's was fully-booked but thanks God because the neighboring resort, Villa Garcia, has two studio-type airconditioned room still available! The owner, Mrs. Lucy Santiago, wife of the former Punong Barangay of Pundaquit, priced the room at PhP 3,500 for an overnight stay!!! Oh my... we had no choice but to get the room to have a place to stay. And besides, we're all very tired and we want to have some sleep that morning before starting our activities. After waking up at 9:00 a.m. , we went to San Antonio public market to have a breakfast. Sorry to say, there are no available meal being sold at Villa Garcia's resort or elsewhere. You really have to bring your own foods and cook it there. Kagawad Aida, however, decided to stay in the resort to rest and sleep more. We had our breakfast at a burger house at the back of San Antonio municipal hall. . We were lucky because they are serving traditional Filipino breakfast meals... the  ___-SI-LOG's!!! Grabe ang sarap ng luto nila kahit medyo mahal, sulit naman. After kumain, ayun balik na uli kami sa Pundaquit at syempre, I took some pictures while on the way.


Pagbalik sa Villa Garcia's resort around 11:00 a.m., Kagawad Aida Corrales decided to go back to Manila for she is not feeling well. Likewise, she then refused to be taken any pictures while we were in Zambales for some personal reasons. Anyway, when she left, husband and wife Ogie and Christy Corrales opted to stay with us though. We then decided to visit our friends at Villa Janella's resort to see what is happening there and to exchange pleasantries and stories of our trip. We took our lunch there and I took some pictures of the people and the scenery... very relaxing!

The boat ride was awesome! It was indeed a an unforgettable experience for all of us. Upon arrivng in Camara Island, we were amazed by huge rock formation in the island. The boat men say Camara Island is a big chunk of rock and no soil or land can be found in the island... only sand and rock and some plants to which we were not that familiar. We were fascinated by the beauty of the island, the waters, the scenery, the skies.. everything was perfect! No words to describe our happiness that time. The white sand, though not that fine as Boracay, is really beautiful with pebbles and corals. The water is crystal clear and the waves are quite strong. We enjoyed every minute of our stay in the island... it's indeed a paradise!

Around 6:00 p.m. when our boat man said that we have to go back to the resort because the sea waves might get rough as night approaches and the wind blows stronger. Plus the fact that there is no electricity in the island, nor we have a portable source of light in case we planned to stay longer beyond 6:00p.m. We prepared ourselves to go back to Pundaquit mainland and we left the island with a smile...and a relaxed and peaceful mind though our stay was too short to fully discover and roam around the island. Our boat ride going back was indeed an adventure! The boat man was correct when he said that waves might get bigger as night approaches. There it was... we saw and felt it while crossing the sea!!! Though there is fear in all of us, we know that we are in good hands and we just enjoyed the boat ride though.

Upon reaching the shores of Pundaquit, we waited for the boat of Kagawad Joel Bacolod, Patrick Chua and Willy Faraon for they were left behind in Camara Island. Bryan, Jojo, Ogie, Christy and I were the first to be fetched to the resort. The boat cannot accommodate more than 4 people. And while waiting for them, I took some pictures of Mt. Pundaquit, Capones & Camara Island... And when they finally arrived, we went straight to our room, washed ourselves and relaxed a bit. At syempre, si Patrick Chua, hindi pinalampas ang pagkakataon na makapagpa-picture sa aming bangkero! Haha... type ng hitad ang boat man!


After resting, we decided to visit our friends again at Janella's Resort. And again, we took our dinner there and we had a bad experience with the caterer brought by the Barangay 176 contractor. Ogie Corrales will never forget that arrogant and stupid staff of the caterer. After dinner, we did some picture taking and as usual, exchange of pleasantries.

We went back to Villa Garcia after that horrible experience with the caterer and we drank till dawn. April 10... upon waking up in the morning, we prepared ourselves and pack our things to leave the resort. We will be heading next to Olongapo City to take our breakfast there in a house of my friend. We bought our food at Olongapo City public market then we were met by the owner of the house to whom we'll be staying to take our breakfast. We proceeded to his house at "Little Baguio", a community on a hill, and we have to literally climb the steep stairs going there. We were laughing all the time to Willy... for he had a hard time climbing those steps! The place somehow has a resemblance to Our Lady of Lourdes Grotto in Baguio City. After eating and resting for a while, we went down to go on our way back home... 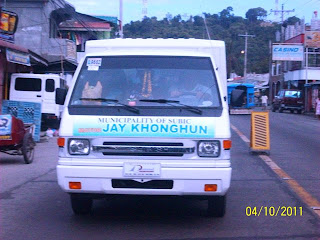 Generally, our trip was indeed a memorable one! Being in the company of Kagawad Joel Bacolod, Ogie & Christy Sangines-Corrales, Patrick Chua, Willy Faraon, Jojo Ramirez and Bryan Balanon was an ease. It's really a good decision that we had an itinerary of our own rather than joining the big group of barangay staff in that trip. I should say, if not because of our consolidated will to be on our own, our trip will surely be a "botched"! Haha...
Anyway, for those planning to go to Pundaquit and looking for an accommodation for an overnight or longer stay, I recommend Villa Garcia, not that luxurious, but a good place to stay somehow. Just contact the owner, Mrs. Lucy Santiago at 09183191504 or 09065726876. Until then!
Posted by waldzrenales at 13:54 No comments: Links to this post